Welcome to our Churchyard! We hope you enjoy wandering round and find it a peaceful place. There are lots of interesting things here – follow our trail to find out more!

As you walk around, you may walk amongst the graves, but please do so very carefully AT YOUR OWN RISK. The ground is uneven and gravestones / memorials may move unexpectedly.

‘Lych’ is derived from the Old English word ‘lich’, meaning corpse. It was a meeting place and shelter for the party bringing a corpse for burial. The 1549 Prayer Book required the clergyman to meet the corpse here. Our Lychgate is newer and is a First World War memorial built in the early 1920’s. We see some of the graves at number 10 of this trail.

The gate reminds us that all of us have to face physical death but in Jesus Christ we have the promise of eternal life that starts here and now!

Walk into the churchyard on the path until you get to the building. The next station is on your left.

Dr J W Peers became rector of this church in 1778. One of the church members had given money in 1718 to build the Free School (just across Central Road) and in 1826 Dr Peers created a fund to enable its continuation as a Sunday School for the education of working children, which aimed to teach “reading, writing, cyphering (arithmetic) and a knowledge of the Bible”. State education started in 1870 although it was not free as it is now. He died in 1835 aged 90.

Jesus reminds us how important children are:

Walk further alongside the building on the path (with Manor House on your left). Stop at the church porch, the next station is diagonally on your left, about 7-8 metres from the path.

The Mauvillain family were French Huguenots; Protestants who held to the Reformed, or Calvinist, tradition. They had to leave France because of religious intolerance. This was only corrected in 1985 by President François Mitterrand who announced a formal apology to the descendants of Huguenots around the world. Peter Mauvillain set up a calico printing works in Ravensbury Park. Five other family members are mentioned on the tomb.

This family’s experience reminds us that…

From the church porch, walk towards the fence, the next station is in front of you.

The family tomb is in the form of a cut-off pillar, popularly used previously to show the end of the male line, which is not the case here. Austin (Arthur) Rudd was one of Britain’s finest comic singers. His first professional appearance at the age of 22 was at Deacon’s Music Hall, Clerkenwell. He composed many of his own songs. He died in 1929 aged 60. The family celebrated Austin’s life in 2015 with the unveiling of a blue plaque in Edgware Road.

Singing is a great way to praise God:

Facing the pillar, the tower is right next to you…

In the tower are 3 bells, which can only be tolled, i.e. not swung right over; the frame is no longer strong enough. Usually if bells are needed there’s a sound system for relaying tape recordings. The clock (facing east) has a pendulum and the weight has to be wound up regularly.

The battlements on the top of the tower remind us of towers used as defensive positions. Proverbs puts it this way:

The clock reminds us that we have no power over the passing of time but our times are in God’s hands.

The window contains early 17th century glass, though it was repaired in 1828, and 1952. The centre lights contain the Ten Commandments, with pictures of Moses and Aaron on the left and right. Below are smaller panels containing text:

“The law was given through Moses; grace and truth came through Jesus Christ.” John 1:17

The window was expertly restored in 2020 and has protecting clear glass towards the outside. The window is best seen with light shining through it. Light shows things for what they really are!

Turn around facing away from the window, and there is a single large gravestone ahead of you…

Maconochie was born in Edinburgh in 1787 and joined the Royal Navy in 1803. He saw active service in the Napoleonic Wars. When his ship was wrecked off the Dutch Coast, he was taken as a prisoner of war. More than two years of imprisonment gave him an experience that he used later in his reform of prisons.

A deeply religious man, of generous and compassionate temperament, he was convinced of the dignity of man and attempted to remove cruelty from punishment and replace it with incentives. His beliefs were instrumental in abolishing the transportation of convicts to Australia and was supported in this by William Wilberforce. His concepts and many of his practical measures are now the basis of Western penal systems.

The current chaplain of the “Alexander Maconochie Centre” – a prison in the Australian Capital Territory – has recently been in contact with us.

Amazingly God does not wait for us to be reformed before forgiving us!

Please be careful here, the ground is uneven. You may want to walk along the pavement outside the churchyard to see the next station. Otherwise, walk along the fence (in the direction of Merton College) until you get to the next big tree. There is a memorial to Fanny Adams at the foot of the tree. The next station is just beyond the tree.

Augustus Schermuly was British-born to a family that emigrated from Holland in the mid 1600’s. He trained as a seaman in 1871 and later served on several ships. In 1880 he left the sea and joined the London fire brigade. In 1897 he started developing several inventions. In 1911 Augustus and his family were living at Frederick Road, West Sutton. By 1920 his pistol rocket life-saving apparatus was being used by 22 leading shipping lines. This was a hand-held device that used rocket propulsion to fire a rope to sailors who had ended up in the sea. The device was an important life saving device and prevented many men from drowning. He set up a company to manufacture the device in Cheam. It later moved to Newdigate in Surrey and was eventually taken over by Pains-Wessex.

Continue along the fence (either inside on the grass – be careful! – or outside on the pavement). When you get to the next tree, just before that there is a half-size gravestone in pale stone…

Despite Gilliat’s wealth, his grave has a small memorial stone which is quite hard to find!

Morden Hall Park was developed by the Hatfeild family who made their money from snuff milling on the Wandle. The Hall was a military hospital during the First World War and continued after the war with the facilities financed by Gilliat (his grandma’s surname) and run by the Salvation Army.  He lived alone in Morden Cottage after his fiancée was killed in a fire. He was passionate about making the park available to local children who had little opportunity to enjoy the benefits of nature. Every school in the area was treated to an afternoon summer outing. When he died the estate was given to the National Trust.

From inside the churchyard: to the left there is a clear way through the gravestones, over very uneven ground, please be careful as you walk to the tarmac path. At the path turn right and walk until you are about 5 metres from the gates, the next station is on your left behind a rose bush.

From outside the churchyard: go back to the lychgate, go through, go right on the path at the corner of the building, and continue straight along until you are about 5 metres from the gates at the end. The next station is on your left behind a rose bush.

Captain Stockley was born in India in 1869 and died in 1917. He went to Wellington College in Berkshire in 1880. He served with the South African Police in the Matabele War, with the Rhodesian Police in the Mashona War and with Thorneycroft’s Mounted Infantry in the South African War. In 1915 he obtained a commission but he volunteered to go to Somaliland in 1916. Unfortunately camel riding aggravated an old internal complaint and he was invalided home. He died at Hull, the headquarters of the regiment, after only a few days’ acute illness.

There are four other service headstones:

These and others are remembered every Remembrance Sunday at the Lychgate.

When Jesus was asked why his disciples didn’t fight to prevent his arrest he answered:

William was the first member of the Australian Merchant Service to be elected to the Corporation of Trinity House, in 1928 as an Elder Brother. Trinity House is a charity dedicated to safeguarding shipping and seafarers, providing education, support and welfare to the seafaring community with a statutory duty as a General Lighthouse Authority to deliver reliable, efficient and cost-effective aids to navigation for the benefit and safety of all mariners. He often served as a nautical assessor in the British courts, including in the Judicial Committee of the Privy Council. He was awarded a CBE on his retirement in 1958.

Turn around and go back alongside the building the way you just came. Stop at the corner and the next station is ahead and to the right.

We hope you have enjoyed this trail.

Pause a while to consider the magnificent cedar tree. The roots of most trees are as extensive underground as the branches are above. The roots provide stability against strong winds and water for growth.

Thank you for visiting. If you have any questions or comments please visit: stlm.uk/respond 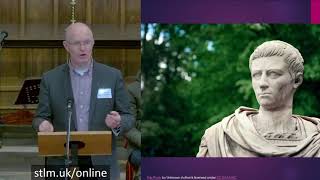 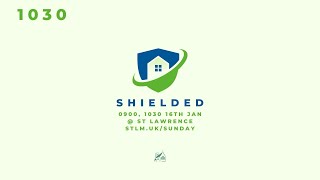 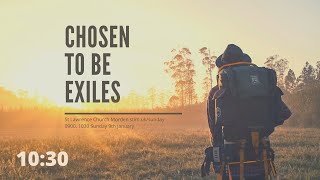 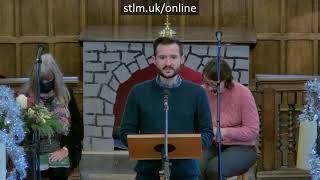 active
Sunday Service [...]
Personnel shortages this Sunday mean that this service may go out as [...]
More Videos